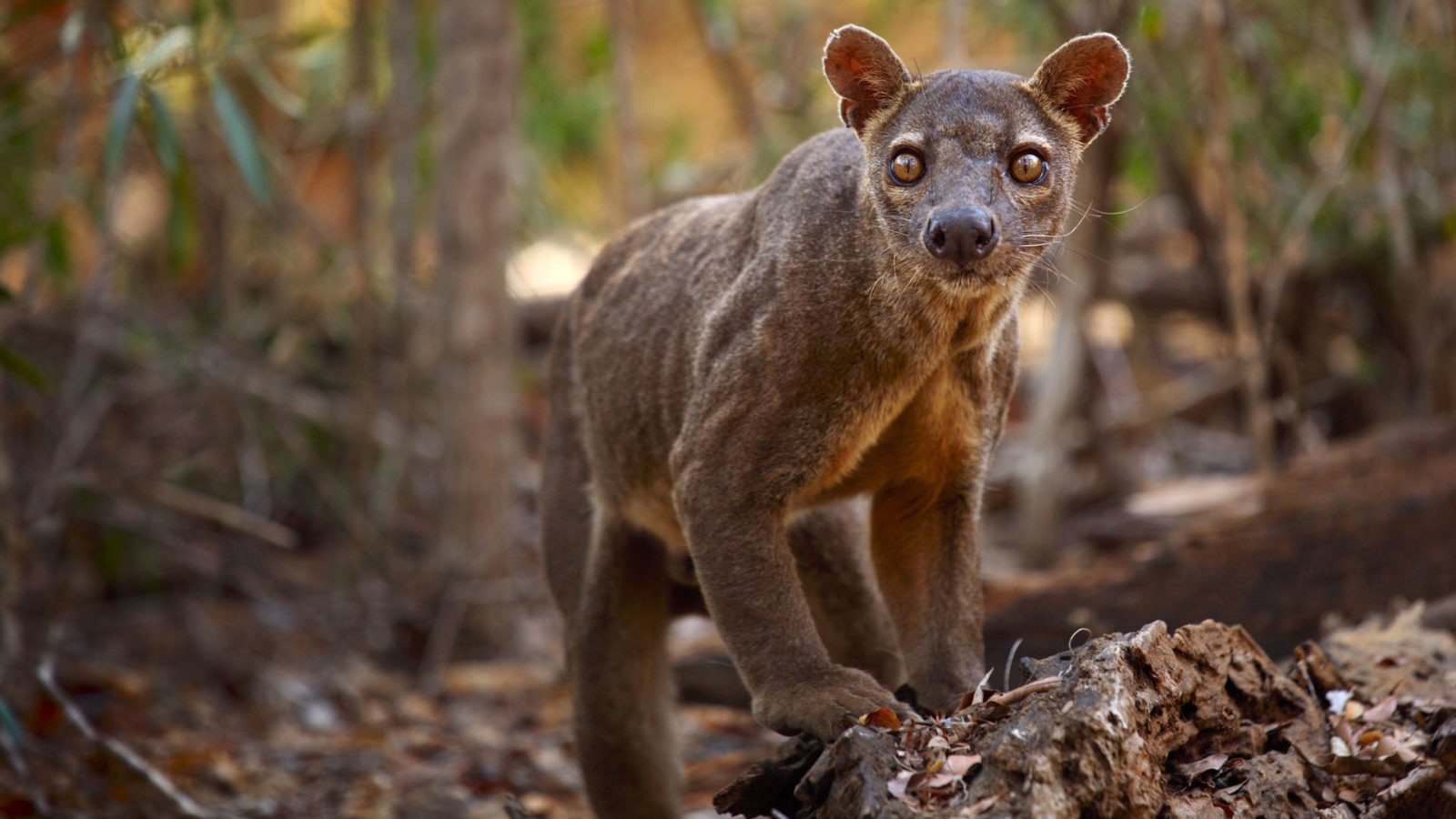 DISTRIBUTION: Although rarely seen, the Fosa is found in virtually all of the intact forest on the island, and will even venture out of forest into agricultural areas and villages during the night.
ID: This long-tailed, heavy-jawed, puma-like carnivoran is the largest living indigenous land mammal in Madagascar, and is unlikely to be mistaken for anything else.
VOICE: Most common call is a quiet, ominous, grunted “meow”. During the mating season, the male gives a low roar, while the female makes a wild, higher-pitched howling.
BEHAVIOUR: Active both day and night. Equally at home on the ground and high in trees, the Fosa is the feared predator of Madagascar, preferring mammals, including the largest lemurs and the introduced Bush Pig Potamochoerus larvatus (not illustrated). It will also eat smaller carnivorans, Giant Jumping Rat, tenrecs, reptiles, birds, amphibians, invertebrates and domestic animals. Between two and four young are born during the wet season.
WHERE TO SEE: Generally hard to find. Kirindy Forest is the best location. Sightings there are likely between May and October, and almost guaranteed during the November mating season. Also regularly seen in Ankarana, Andasibe-Mantadia, and Zombitse-Vohibasia NPs, most often during November, when pairs may mate for hours high in the trees.

Con-fosa-ing Two animals are often called ‘fosa’ in Malagasy: the Fosa proper (alternately ‘fosa varika’), and the Spotted Fanaloka (page 66). Adding to the confusion, the scientific name of the Spotted Fanaloka is Fossa fossana due to some confusion when this species was described. The rare Falanouc Eupleres goudotii (not illustrated) may also be referred to as ‘fosa’, so care is needed when when discussing carnivoran sightings, especially with local guides who are helping you to search for these creatures. Male Fosas have the largest penis bone in relation to their size of any land mammal, and pairs engage in snarling bouts of mating that can last for hours.

GET FREE CUSTOM MADE HOLIDAY PACKAGE FOR YOUR NEXT HOLIDAY!

Our travel designers are always available to develop a customized holiday plan with your involvement & preferences. Enter your email below and we will get back to you